Guidance to Test-fire of ICBM Hwasong 15 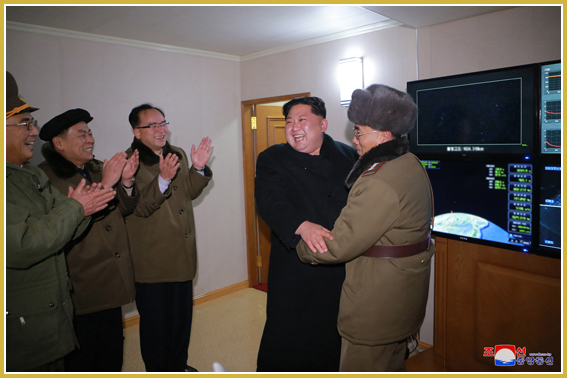 The test-fire of ICBM Hwasong 15 was successfully conducted on November 29, Juche 106 (2017) under the direct guidance of Kim Jong Un, Chairman of the Workers’ Party of Korea, Chairman of the DPRK State Affairs Commission and Supreme Commander of the Korean People’s Army.

The Supreme Leader oversaw the whole course of the test-fire on the spot.

The workers in the sector of munitions industry, vanguard fighters in implementing the WPK’s policies and forerunners of self-reliance who have cherished deep in their minds the indomitable fighting spirit under the leadership of the WPK, manufactured the Korean-style 9-axle self-propelled launching vehicle on their own in a short period of time, and the scientists and technicians in the field of defence science developed a new type of ICBM by giving fullest play to their creative wisdom and enthusiasm.

In those days, the Supreme Leader visited several times the site for developing the new ICBM and the site for the firing test of motor and learned in detail about their actual situation and thus led scientists, technicians and workers in the defence science sector to the current victory.

After receiving a report on finishing the test-fire of the ICBM on November 28, he came to the site for its technical preparations late at night to see the 9-axle self-propelled launching vehicle made by the Korean workers.

He expressed great satisfaction over the fact that the munitions industry sector is now in a position to produce launching vehicles in larger numbers as they made a breakthrough in domestic and Juche-oriented production of vehicle body, motor, large-sized tyres, lifting arms, launching pad, hydraulic and power units, electric controllers and other elements.

Staying with the scientists and technicians at the launching site, he oversaw all the pre-launch processes, including vertical standup of the ICBM.

He then learned in detail about the plan for test-fire at the command post before giving an order to launch.

The test-fire was aimed at verifying the tactical and technical specifications of the newly-developed weapon system and the reliability of its operation. The test-fire was conducted in the highest angle launch system

Expressing great satisfaction over the successful test-fire of ICBM Hwasong-15, he said in excitement that he gave his warm thanks to all the combatants who have taken part in developing it.

Today is a significant day when the great historic cause of completing the state nuclear force, the cause of building a rocket power, has been realized, he said, adding that this day when the great strength, which raised the DPRK’s strategic position to a higher level, was born should be specially recorded in the history of the country.

Warmly congratulating the scientists, technicians and workers in the defence science sector who demonstrated the dignity and might of Juche Korea once again to the whole world by successfully test-firing the newly-developed ICBM, he had a photo taken with them.