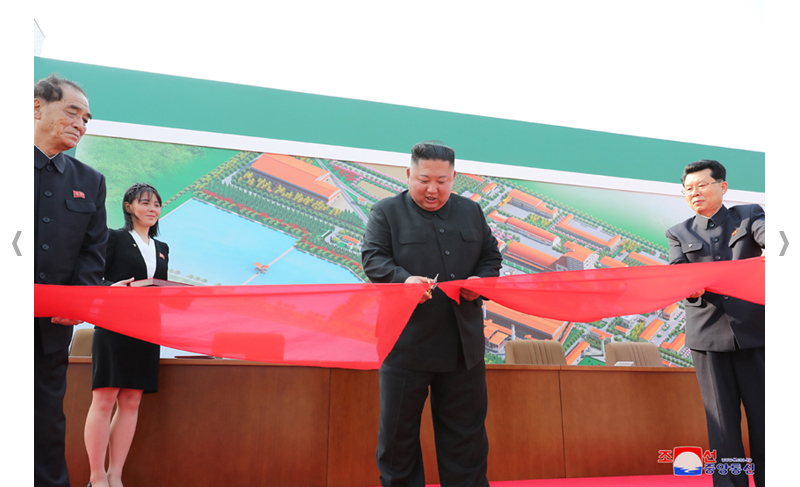 The Suncheon Rin Fertilizer Factory has emerged as a creation of self-improvement and self-prosperity in the Chongjin Gun-gil, where the entire people are facing the rigors of the revolution and opening new routes for socialist construction, following the grand design of our party.

Our red flag shows the unchanging creed of the Joseon Workers Party and the people that the hostile forces will blow more and more as the wind blows, and the new chemical industry base has been completed with great success. First of all, I put in the spirit of victory.

The completion ceremony of the Suncheon Lin Fertilizer Factory, which stands out as the main fertilizer production base, was held on May 1, the international holiday of workers around the world.

Proud creation of the Great Labor Day, another Suncheon Linn fertilizer plant for the construction of the Bugang Motherland, the needs of subjectivization and modernization are thoroughly realized, and the model and standard of the chemical industry are perfect in production, architecture, and ecological environment protection. It is a factory.

Under the wise leadership of the dearest leader, the Great Leader, the great leader Comrade Kim Il- sung and the Great Leader, who dedicated the whole life and established a strong foundation for the socialist economy by creating the subjective lean fertilizer industry based on our strength, our technology, and our raw materials. A breakthrough was opened to light the path of comrade Kim Jong-il 's immortal achievements and decisively increase grain production.

The construction of the Suncheon Rin Fertilizer Factory, which sounded the first victory in the frontal breakthrough for the decision-making of the 7th Fifth Conference of the historic Chosun Workers' Party Central Committee, received the spirit of the Party-centered thought and leadership in the spirit of association and self-regeneration. When the power explodes, it is giving back to the conviction of victory that the dignity and status of the power can be thrown away.

In the midst of the welcome song, comrade Kim Jong- un, the highest-ranked leader who admires, came to the completion ceremony.

All participants give the greatest honor to comrade Kim Jong- un, a respected senior leader who brings a new transformation in the subjective fertilizer industry development with an excellent command and leads the revolutionary march to strengthen the self-reliance economy to victory. He shouted cheers.

Park Bong-ju, the vice chairman of the State Committee of the Democratic People's Republic of Korea and the Vice-Chairman of the Party Central Committee, was completed.

Comrade Park Bong-ju is a heroic working class who dares to achieve a new victory in socialist construction by boldly breaking through the frontline of the Great Party and completing the construction of the Suncheon Lin Fertilizer Factory. It was said that it would be a great slope to bring great joy to people.

Dear Mr. Choe-Do-Jung, presented the combat task of constructing a large-scale modern plant that produces high-concentration lean fertilizer that is desperately needed for agricultural production. He mentioned that he energetically led us to become a power-saving company that realized automation and streamlining.

In our way, he built a number of scientific and technological problems in the realization of the realization of the Lin fertilizer industry, as the builders, scientists, and the People's Army soldiers who consolidated the spirit of the party policy-determination regime conducted an assault and fierce vigil of loyalty. He talked about his devoted struggle to resolve and speed up the day of completion.

The completion of the construction of the Suncheon Lin Fertilizer Factory, which drastically develops the fertilizer industry in our country and drives the front of the economy, is a great victory for our party's front breakthrough, self-improvement, and self-prosperity. He again demonstrates that he can capture as many of his struggle goals as possible.

Comrade Park Bong-ju emphasized the great achievement of self-rehabilitation and continued strong achievements of the revival of the socialist country by further strengthening the enthusiasm for the front-breaking battle by solidifying the admiration of the oldest leader, Kim Jong- un , with respect to comrades. .

With the independence and self-sufficiency, the entire people's troops for the realization of the great troops of the wealthy troops are guided, and all the participants are touched again to bring up the respected oldest automatic magazine that shines the dignity and national power of socialist shipbuilding in the best possible condition. The shout of “Long live!” Touched the heavenly land.

The dearest governor-general of Korea, the courtesy of the enthusiastic builders and the crowd, greeted warmly.

Dear Mr. Choi, you can see how wonderfully the great leader and the great general who gave a huge logo to solve the food and eating problems of our people while looking at the panoramic view of the factory, and how modern Lin Fertilizer Factory has risen. He would be pleased and said hotly.

The dearest senior citizens' autonomous magazine is now able to devote all of our agricultural workers to taking control of the highland proposed by the Party, and the Suncheon Lin Fertilizer Factory is a proud fruit created by the united forces of the Party's policy absolutes. In doing so, he appreciated the warmth of all the builders, scientists, and engineers.

Dear Mr. Choi, Senior High School, expressed his satisfaction with the faculty and researchers of Kim Chaek University of Technology in cooperation with related units, and established an integrated production system of the Suncheon Lin Fertilizer Plant, while talented people are the country's great resource and power of development. Fostering repeatedly emphasized that our party is the most important policy issue.

Dear Mr. Choi, said that the completion of the Soonchunrin Fertilizer Plant was the first achievement achieved since the 7th 5th Power Conference of the Party Central Committee and was an important opportunity to leap the chemical industry of our country to the critical level. He talked about how to make the flames of self-prosperity and self-prosperity burn more fiercely in all areas of Gangguk Construction.

Dear Mr. Choe-do, the issue of thorough establishment of raw material guarantee measures to normalize the production of lean fertilizer, the problem of running a stable production process with a more complete integrated production system, and the issue of turning special attention to environmental protection projects In addition, he presented the tasks specific to the factory management operation.

Dear Mr. Choe-Do-Do, he revealed the tasks and strategies to develop our chemical industry in the right direction to meet the needs of the new century, including the generalization and modernization of fertilizer factories and the construction of more new chemical bases.

Dear Mr. Choi, who is the oldest leader in the field, the spirit of creating a new industry based on our raw materials and our technology by workers, scientists, engineers and builders, and with the spirit of it, boldly launch an attack to open a new path to socialist construction. By leaving, he expressed his expectation and conviction that he would shake off the power of our party's great breakthrough.

All the participants who honored the comrade Kim Jong- un , who dearly admired him, and held a significant completion ceremony, honored the party's ideology and self-renewal and torture, and glowed with the proud achievement of the 75th anniversary of our glorious achievement. It was full of burning enthusiasm that would constantly shake off the new victory.