The historic fourth north-south summit meeting and talks took place at the Thongil House in the north side area of Panmunjom on May 26.

Kim Jong Un, Chairman of the Workers' Party of Korea, Chairman of the State Affairs Commission of the DPRK and Supreme Commander of the Korean People's Army, came to the Thongil House at Panmunjom to meet and hold talks with President Moon Jae In of south Korea.

Panmunjom, which had drawn the focus of global attention as a symbol of peace heralding the new start of inter-Korean relations and opening up a new era of reconciliation and unity, witnessed another historic meeting between the top leaders of the north and the south in 29 days.

KPA honour guards lined up in front of the Thongil House, the venue of the summit, to receive President Moon Jae In.

Supreme Leader Kim Jong Un warmly welcomed and exchanged greetings with President Moon Jae In, who arrived at the Thongil House on the north side after crossing the demarcation line at Panmunjom.

The two leaders were so pleased to meet again at the historic place in a month that they warmly shook hands with each other.

Prior to the talks, President Moon Jae In made an entry in the visitors' book of the Thongil House to mark his visit to the north side area, which reads: "Peace and Prosperity of the Korean Peninsula, together with Chairman Kim Jong Un of the Democratic People's Republic of Korea! May 26, 2018 President of the Republic of Korea Moon Jae In".

Kim Jong Un and Moon Jae In had a photo taken with their hands firmly held to commemorate the fourth north-south summit.

Kim Jong Un shook hands with each of the south Korean personages accompanying Mun Jae In, sharing the pleasure of meeting. 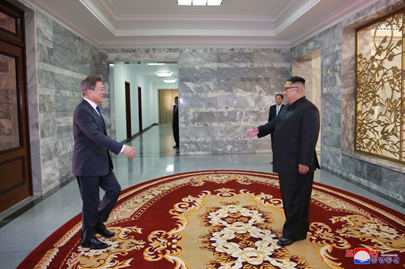 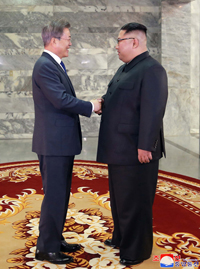 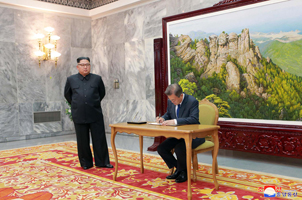 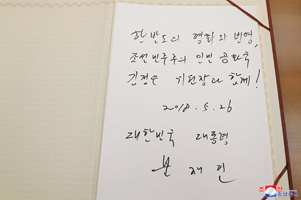 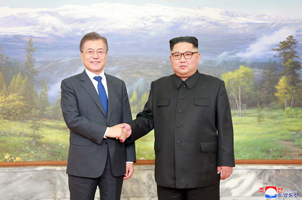 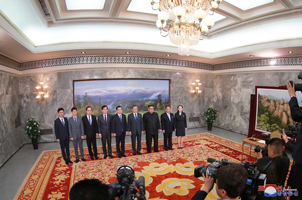 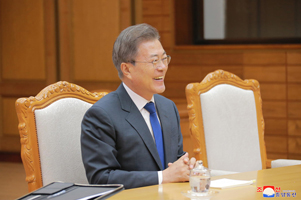 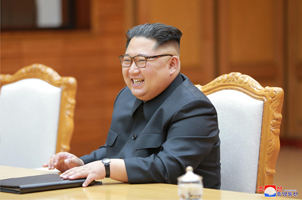 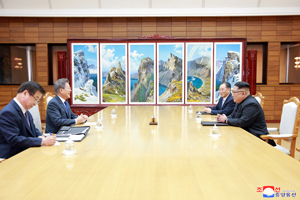 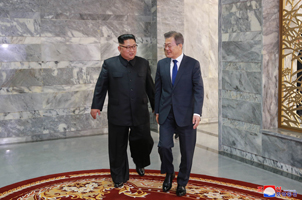 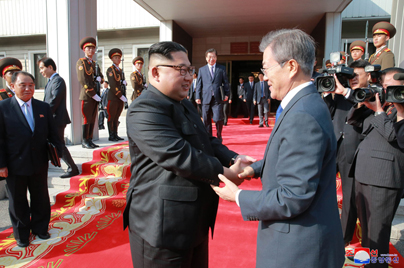 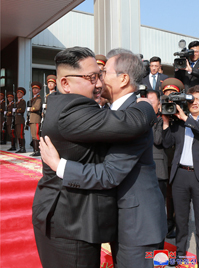 There were talks between Kim Jong Un and Moon Jae In.

Present there were Kim Yong Chol, vice-chairman of the Central Committee of the Workers' Party of Korea, from the north side and So Hun, director of the National Intelligence Service, from the south side.

At the talks there was an in-depth exchange of views on matters which should be resolved to quickly implement the Panmunjom Declaration agreed upon at the third north-south summit, realize the denuclearization of the Korean peninsula and achieve regional peace, stability and prosperity, those the north and the south are now faced with and for successfully holding the DPRK-US summit.

Kim Jong Un and Moon Jae In agreed that both sides should trust and care for each other and make joint efforts to ensure that the Panmunjom Declaration reflecting the unanimous desire of all nationals is implemented as early as possible.

They agreed to hold the north-south high-level talks on June 1 and further accelerate the programme for talks in various fields including those of military authorities and the Red Cross.

The two leaders were unanimous that they would meet frequently in the future to promote dialogue and pool wisdom and energy, expressing their stand to make concerted efforts to denuclearize the Korean peninsula.

Kim Jong Un suggested to positively work together to improve DPRK-US relations and build a mechanism for permanent and durable peace.

They reached a satisfactory consensus on the matters discussed at the talks.

They warmly embraced each other and exchanged good-byes, making an appointment to meet again.

The meeting, in which the top leaders of the north and the south freely and open-heartedly heard each other's views on the crucial pending issues and had a candid dialogue, marks another milestone that opens up a new chapter in the development of the north-south relationship.

The fourth north-south summit held at Panmunjom, which has been recorded in history as a symbol of national reconciliation and unity, peace and prosperity, will give fresh hope and vitality to all the Korean people.