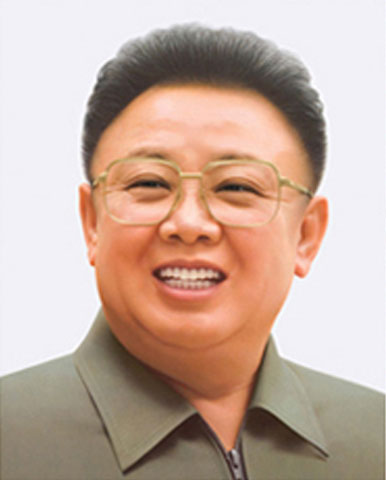 The international community praises Kim Jong Il, leader of the Democratic People’s Republic of Korea, as a peerlessly great man.

He is an excellent thinker and theoretician. He formulated the revolutionary ideology of President Kim Il Sung, founder of socialist Korea, as an integral system of idea, theory and method of Juche. His work On the Juche Idea made public in March 1982 has become the first must-read book for the advocates of the Juche idea around the world.

He has incessantly engaged in ideological and theoretical activities to develop and enrich the Juche idea as required by the times and revolutionary development.

He advanced a large number of new ideas and theories, such as the revolutionary philosophy of Juche, and the theories on modeling the whole society on the Juche idea, on carrying forward the revolutionary cause, on people-centered socialism and on building a Juche-oriented party and revolutionary armed force. All his ideas and theories are the strategic lines of defending national independence and sovereignty and accomplishing the cause of socialism and cover every domain of social life-politics, the economy, military affairs, the art and literature, and science and education.

Kim Jong Il, busy as he is leading the country and people, has provided comprehensive and perfect answers to the theoretical and practical problems that are required by the times and reality. In the years when the socialist system was abolished in Eastern European countries and the ideal of socialism was under severe criticism, he made public such works as The Historical Lesson in Building Socialism and the General Line of Our Party (January 1992), Abuses of Socialism Are Intolerable (March 1993) and Socialism Is a Science (November 1994), thus instilling in the world progressive people great encouragement and dealing a heavy blow to imperialists and socialist renegades.

Particularly, noteworthy in his ideological and theoretical activities is that he has developed in depth the Songun idea. He has formulated Songun politics as the basic political mode of socialism by developing in depth the Songun idea rooted in Juche idea to meet the new conditions of the present times. Thanks to him, a powerful ideo-theoretical foundation has been laid for the victorious advance of socialism under whatever fortuitous circumstances and conditions.

Kim Jong Il is the master of leadership

He solves all problems in such a way to ideologically motivate people by giving top priority to ideological work over all other affairs. He puts forth appealing slogans to encourage the army and people, and gives fullest play to the inexhaustible creative ability of the masses by initiating various kinds of mass movements. As he has attached importance to the power of ideology and wisely led to its maximum display, Korea witnessed last century the 8-km West Sea Barrage constructed across the sea and socialism defended with credit despite the excessive economic blockade and sanctions of the imperialist allied forces and severe natural calamities. In recent years alone in this country the construction project of the large-scale Huichon Power Station that had been estimated to be finished in over ten years was completed within three years.

Through his incessant trips of field guidance he is always among the people, shares with them life and death, and greatly inspires them to the struggle for accomplishing the socialist cause. His Songun-based revolutionary leadership started with his inspection of a unit of the Korean People’s Army on August 25, 1960, and continues today, visiting the army and people even on Sundays, holidays and his birth anniversary days.

Thanks to his unexcelled political ability and energetic leadership Korea has developed into a politico-ideological and military power, and is making miraculous achievements day after day in its drive to build an economic power.

Kim Jong Il is the great veteran of independent politics

At the close of the last century, when socialism collapsed in several countries, he initiated that the Pyongyang Declaration, titled, Let Us Defend and Advance the Cause of Socialism, was adopted and signed by scores of political parties aspiring after socialism. The declaration has proven its great vitality in overcoming the temporary frustration of the world socialist movement. Socialism has expanded its scope of influence even to many Latin-American countries, once called the “quiet backyard” of the United States, far from having met its end as imperialists had clamored about. As of the present day, the declaration has been signed by over 270 political parties.

Kim Jong Il has made great contribution to the defense of the global peace and security and the building of a new independent world with energetic external activities. The DPRK-Russia Moscow Declaration adopted during his visit to Russia in 2001 was a historic declaration that indicated the direction of independent development in the new century and made a breach in the United States’ attempts for unipolar global integration. Several rounds of his recent visit to China and the Russian Federation are also recognized to be of great significance in easing the tense situations in Northeast Asia, realizing the denuclearization of the Korean Peninsula, aspiring after peace and stability of the world, and putting the international community along the democratic and independent track.

It is therefore quite natural that the world mass media pay special attention to and provide wide coverage to Kim Jong Il’s foreign activities.