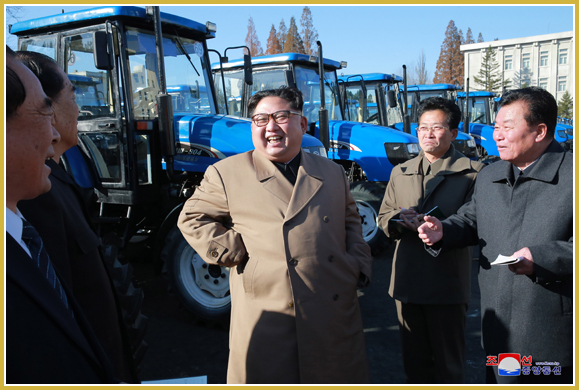 Kim Jong Un, Chairman of the Workers’ Party of Korea, Chairman of the DPRK State Affairs Commission and Supreme Commander of the Korean People’s Army, visited the Kumsong Tractor Factory which has successfully carried out a task assigned by the Party by displaying the revolutionary spirit of self-reliance.

He looked round the halls dedicated to education with revolutionary relics and the factory’s history.

He viewed a new type of 80hp tractors produced by the factory.

Seeing hundreds of blue-painted Chollima-804 in rows, he said it was a sight to behold and a noticeable achievement, and repeatedly appreciated the success.

He climbed into a tractor and drove it to check its performance and technical specifications.

He said that the engine starts well, it is easy to drive and it moves dynamically, adding that the exterior looks smart and the fittings are also satisfactory. The tractor is well built to suit the Koreans’ physical constitution, he said, and it is on a par with world-famous brands.

The rate of domestic production reaches 98.7 percent with 10 126 items of 3 333 parts locally made out of 10 228 items of 3 377 parts in total necessary for manufacturing a unit, he said. And he described it as a Korean tractor born in the Mallima era and a valuable fruit of the indomitable revolutionary spirit displayed by the heroic Kim Il Sung and Kim Jong Il working class who set the highest target and achieve the best result without fail even under the worst conditions.

The factory, which injected new impetus into the great Chollima era by turning out the first generation of Chollima tractors, is adding brilliance to the current Mallima era with the production of a new generation of tractors, he stated. The buzz of the new tractor he called a proud outcome of the Mallima era sounds a loud marching song of advancing socialist Korea, he stressed. The Supreme Leader specified the factory’s task for next year and a modernization project as he made the rounds of workshops for processing and assembly, sheet metal processing and casting among others.

Noting the factory assumes a very important mission in realizing the overall mechanization of agriculture, he hoped the factory’s officials and workers would make remarkable achievements in production and modernization. And he had a photograph taken with labour innovators.