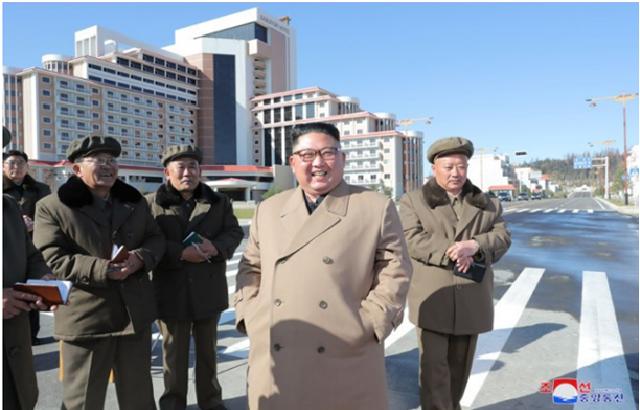 Pyongyang: Kim Jong Un, chairman of the Workers' Party of Korea, chairman of the State Affairs Commission of the Democratic People's Republic of Korea and supreme commander of the armed forces of the DPRK, gave field guidance to the construction sites in Samjiyon County where the second-phase project is in the successful final stage. Enjoying the panoramic view of the township whose looks changed beyond recognition, Kim Jong Un was informed in detail of the second-phase project. He said all the buildings in the township area reminiscent of a city were built to fully reflect the modern beauty in good harmony with the natural forests of Mt Paektu.

Valuable experience and lessons for regional construction have been gained and a precious foundation, a revolutionary springboard for successful realization of the Party's idea of regional construction, was provided through such a gigantic campaign for creation as the remodeling of Samjiyon County, he noted. We should continue to wage great construction campaigns of model and weighty significance, so as to develop regional construction with vivid local characters on the basis of the Juche-based architectural aesthetic idea in all parts of the country, he said.

Noting that a new history of changes of Samjiyon County has been made thanks to the utmost care and loyal sweats of the people across the country for the great holy land, he made rounds of various streets and districts of the township area for a long time to learn in detail about the construction and preparations for the operation of public catering outlets. He directed the construction of the Samjiyon County People's Hospital and Dental Hospital. He acquainted himself with the preparations of the medical group of the Samjiyon County People's Hospital.

He inspected the Samjiyon Blueberry Drink Factory. Noting that the finishing touches are being given to the second-stage construction of Samjiyon County as a whole, he said with great pleasure that the township area of Samjiyon County is spectacular and it has undergone a dramatic change in the true sense of the word. It is so regretful that he can not show Chairman Kim Jong Il the changes in the northern tip of the country, he said, adding that he felt a little relieved at the thought that he has fulfilled the duty as his soldier and son even a bit, though belatedly.

The situation of the country is still difficult owing to the ceaseless sanctions and pressure by the hostile forces and there are many hardships and trials ahead of us, but our people have grown stronger in the trials and found their own way of development and learned how to always win in the face of trials, he pointed out. He extended deep thanks and warm congratulations to all the builders for having built a wonderful model and ideal example of a mountainous city without parallel in the world so as to defend the dignity of the Party and safeguard the existence of the State despite all sorts of ordeals and hardship at the most crucial time in history.

Saying that the pain the U.S.-led anti-DPRK hostile forces inflicted upon the Korean people has now turned into anger, he stressed that whenever the enemies try to strangle us with the chain of pressure, we should pave the way with our own efforts to continue to live well-off in the great spirit of self-reliance so that the enemies feel pain in their stomach and head. Saying that we should neither want help from anyone nor lend an ear to any temptation, he stressed that we should choose the prosperity based on our own efforts only as the immutable road of development and keep holding higher the banner of self-reliance as we do now.

That no matter what persistent efforts the enemy may make, we can live well with our own efforts and pave the avenue to development and prosperity our own way is a review of the year 2019 that has brought about a higher leap forward, miracles and feats despite trials and difficulties, he noted with conviction. He set forth the tasks for wrapping up well the second-stage project of sprucing up Samjiyon County and those for the third-stage project aimed at giving face-lift to the surrounding areas and farms.

He earnestly called upon everyone to complete without fail the construction of Samjiyon County by the 75th Party founding anniversary by bravely dashing forward with confidence in and optimism about victory and thus turn the native county of Chairman Kim Jong Il into the best socialist land of bliss in the world. He was accompanied by senior officials of the WPK Central Committee Jo Yong Won, Kim Yo Jong, Ri Jong Nam, Yu Jin, Pak Song Chol, Hong Yong Song and Hyon Song Wol, and Ma Won Chun, director of a bureau of the State Affairs Commission. -0-